Should We All Give Up Meat? 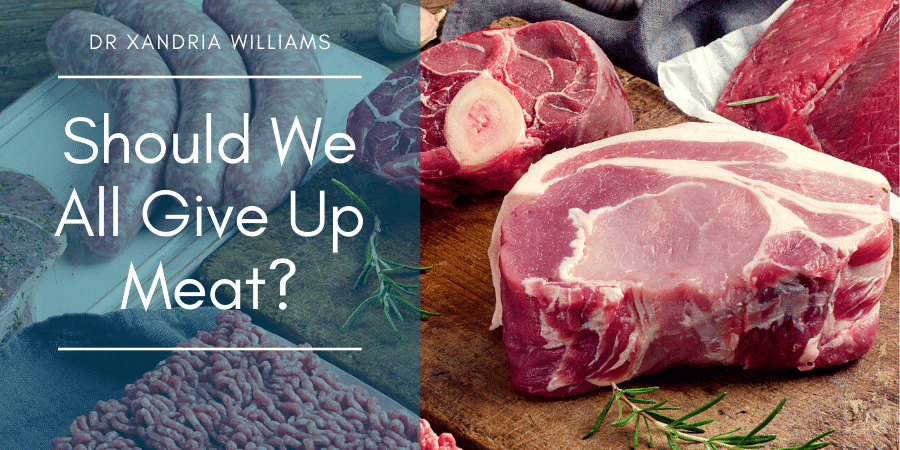 Should We All Give Up Meat?

If we did, would it help save the resources of the planet?

I will show that the answer to both questions is probably no.

It is time to think before initiating a knee-jerk reaction or response. It is also appropriate to think of the consequences, in a larger context, of making such a sweeping change. Some changes would certainly be beneficial, but some would certainly not.

One of the first things I do with, or for, every client that comes to see me is to help them determine their metabolic type. Are they a Fast Oxidiser or a Slow Oxidiser? Are they a Sympathetic Dominant or Parasympathetic Dominant?  Which one of the ten or more different dietary styles is the best one for them? Only be getting that right and laying a firm foundation for whatever suggestions I make for them will I, and they, be able to build their health on a firm foundation.

If you think about the people you know, you will almost certainly find that some people choose to be vegetarian, or, to use a more modern term, pescatarian. That is, they are ovo-lacto vegetarians who also eat fish. They avoid all red (or pink) meats and probably chicken as well. Other people don’t count a plate of food as a meal unless a significant part of that plate contains red meat.

Many food choices today are affected by spiritual instructions or moral and ethical thoughts about not killing animals – although this is almost impossible to avoid entirely. For a start, you cannot have milk without killing calves and keeping the others first pregnant and then ‘in milk’.  But that is another story.

It is very clear in my work, and I suspect it is the same with the work of hundreds of other practitioners like me, that without even refining the sorting technique, about half the population fall into the group that:

And the other half of the population fall into:

This is obviously a very general description of the two major types. However, this Note is not about the details of the different types.

The main point is this:

Those that fall into Population 1 are best suited to follow suggestions that are currently being made and choose a near vegetarian or pescatarian lifestyle. Not only will this help reduce the planetary demands of an animal livestock lifestyle, but it will also lead to a sub-population with improved health and fewer demands (from inappropriate meat consumption) on our health care system.

For those that have studied with me, these people would be in Groups 1, 4 and 6.

Population 2 are best suited to follow their inclination and continue to eat red meat. Hopefully, the animals would be sustainably farmed, organically reared and pasture-raised rather than grain-fed.  If they don’t, these people are likely to be less healthy, have less energy and be less productive, have a different variety of health problems and put more demands on our health care system. What we would gain by reducing the strain on the land we would lose by putting a strain on the health care system.

For those that have studied with me, these would be in Groups 2, 5, 7

The missing Groups, 3,  8, 9 and 10, are people with a very balanced metabolism. They can be healthy on either type of diet. If they want to be healthy and care for the planet, they could consider being largely pescatarian or vegetarian, eating red meats occasionally when they feel like it.

Finding out which Group your metabolism falls into is a very simple matter.

Contact us on office@xandriawilliams.co.uk and we can help you.

If you then answer a questionnaire that we can supply, it will give you the number of the diet best suited to your metabolism. We can then email you a copy of the general food choices that would best suit you.