Thirty years ago during my time in Sydney, I chose to highlight the dangers of aluminium on one of my weekly radio programs.

In those days many frying pans, saucepans, teapots, graters and other culinary-related items were commonly made of aluminium. It was also present in a number of items commonly consumed.

One of my patients back then, Betty Jenson, was an ex-music teacher who had retired early to write a book on the history of the style of music in which she specialised. At least, that was her plan. However, she was finding that her memory was failing. It had reached the point that she would read a section of the material she had been researching for her book,  but by the time pen had reached the paper to add the information to her manuscript, she had forgotten what it was. She was at the point of giving up on her project.

Some months earlier, I had read about aluminium being found in plaques of the brains of people who had been autopsied after having died after a period of senility and dementia.

Betty was using aluminium ware in almost every utensil in her kitchen, from saucepans to frying pans, baking trays to oven dishes.

She also baked cakes. Not only were aluminium salts (such as sodium aluminium phosphate-acidic) added to baking powder at the time, but similar aluminium salts were also added to maraschino cherries, which she used frequently in her cake decorating. Aluminium was used to keep salt free-flowing and as an anticaking agent.  She used an underarm antiperspirant and an arthritic paste, both of which contained aluminium.

Other sources included aluminium cans and aluminium foil. Aluminium is also present in certain toiletries, antacids and other medications.  All in all, she was taking in a significant amount of the metal.

I advised Betty to go out and buy new stainless steel cookware, a ceramic teapot and various other replacements for her aluminium utensils. She stopped using or consuming the other sources of aluminium that we had identified.

Both of us were delighted to find that within a few months her memory had returned sufficiently that she could return to writing her book.

However, her husband became a stumbling block. She had only been allowed to purchase one stainless steel saucepan and limited amounts of other aluminium-free replacements, all of them costly.  He then became cross at the restrictions that put on their food preparation and insisted that she bring back the range of aluminium saucepans that she had stored away.  Within months, her memory had deteriorated badly and her project was never finished.  I knew this as she had several siblings and other relatives, several of whom were also patients.

I spoke of this on my radio program. Soon after that, I had a call from the radio station alerting me to the fact that a large bauxite mining company in the north of Australia was very cross about my broadcast and had demanded air time to assure people of the safety of the metal. I then asked for and was given sufficient air-time to tell Betty’s story.

I was therefore intrigued recently while I was in Geneva at a conference on integrative healthcare.  I was there to present a paper on The Metabolic Approach to Cancer Support, its History and Application.

One of the other speakers, Professor Christopher Exley (the tallest man in the photo) gave details of some of his thirty years of research on the presence and location of aluminium in the brains of people with cancer, multiple sclerosis and autism. Not only was it in the brain, but he was able to show, and with clear photographs, that it was present in lymphocytes (a type of white blood cell) inside the brain, and thus had been able to cross the blood-brain barrier, if not on its own, then ‘smuggled’ in within these white blood cells.

Professor Exley suggested that the lymphocytes, having collected up their aluminium passengers elsewhere, then released them as they themselves were destroyed while fighting a possible episode of inflammation. 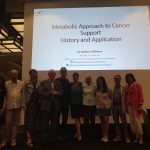 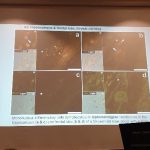